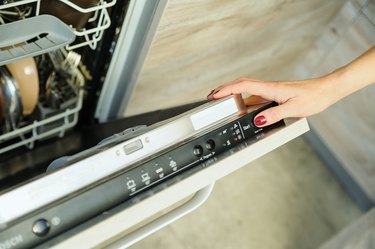 There’s never a good time when the dishwasher breaks down. Of course, there will be a problem when the appliance is clogged with dirty dishes or when remodeling the kitchen. Spend time troubleshooting before calling a plumber or appliance repair expert.

You might only need to call a professional after all, or it might be a simple fix that you can handle yourself. In either case, it’s a good idea to conduct some basic research before selecting a fix if your dishwasher won’t start. Although disassembling the dishwasher to test and replace parts may be necessary for some dishwasher repairs, this is not the case for many typical issues.

Check the easier, less intrusive solutions first when troubleshooting. If the dishwasher still won’t start after you’ve ruled out any simple issues, you’ll need to look a little further.

The dishwasher from Samsung won’t turn on

The majority of people turn off their Samsung dishwashers when they’re not using them to save energy and money. They, therefore, anticipate that the dishwasher will quickly turn on and begin working as soon as it is needed.

Read on to learn what you can do to get your Samsung dishwasher back in working order if you go to turn it on but find that it simply won’t move.

Make sure your hands are completely dry and free of any residue before pressing the power button on your Samsung dishwasher and choosing a cycle if it won’t turn on. To choose and execute a cycle, you must simply press the power button first.

The power supply may be the issue if the dishwasher won’t operate at all. Investigate the circuit breaker. Turn the switch to the “off” position if it has tripped, then turn it back on.

A switch stops the dishwasher from starting when the door latch is not shut. When you close the door, pay attention for the latch to click into place.

Pull on the door while it is closed to ensure that it is shut securely. Visually check the latch on both sides for any obstructions that might be preventing it from engaging correctly and for any broken components. The switch might be damaged if the latch is.

To stop children from opening the dishwasher or altering the cycle settings, the majority of dishwashers have a child lock feature.

In many cases, the child lock must be activated for the device to operate. A button must typically be pressed and held down for three seconds to activate and deactivate the lock.

You should consult the manufacturer’s instructions for the child safety lock if your dishwasher won’t operate and the door won’t open.

If you stopped the dishwasher’s wash cycle and it won’t restart, it might be stuck in between cycles.

When this occurs, sometimes the lights flash and other times nothing at all happens.

Switch the power on and off.

Check the manufacturer’s instructions for resetting the dishwasher if that doesn’t work.

You might need to hold down the start button for a few seconds or unplug the device.

You’ll be able to start a fresh wash cycle after resetting.

Before disassembling the dishwasher, turn off the power.

If you are an experienced do-it-yourselfer, you might be able to fix the broken dishwasher yourself. Just make sure to turn off the power before you open the appliance to do any work.

To test the internal components, use a multimeter.

To make sure you are testing the correct terminals, obtain a wiring diagram for your particular model of dishwasher.

Many people who live in homes with a lot of appliances get used to the sounds that are occasionally released from these devices, whether it be the beep of a washer after a cycle has finished, the bell from an oven once it has been preheated, or the beeping of a Samsung dishwasher when cleaning and drying have finished.

What could be the delay, though, if your Samsung dishwasher is beeping but won’t start?

If your Samsung dishwasher is beeping and won’t turn on, it’s probably because the door wasn’t properly closed and latches. Make sure the dishwasher door is shut firmly and that you can either feel or hear the latch catch to confirm that it is.

You might be able to start your Samsung dishwasher immediately and without any beeping; however, some owners have discovered that once their appliance has started, the dishwasher beeps to signal the start of the cycle.

In addition to being mildly annoying, this also makes owners start to wonder what their dishwasher is trying to communicate.

Continue reading to learn what to listen for and what to look for to identify the problem if your dishwasher beeps after it has started.

To accommodate any specific schedule, a Samsung dishwasher’s delay start button makes it simple to postpone the beginning of the dishwashing cycle.

In other words, you can set up your dishwasher to run after dinner, but it won’t start until you’ve gone to bed, guaranteeing that all of the dishes from the previous night have made it into the load.

Continue reading to learn how to fix delay start if you’ve tried using it but it isn’t working.

Make sure you are using the delay start feature of your Samsung dishwasher properly if it isn’t working. Choose the desired cycle, tap the Delay Start button on your dishwasher, and then press the Start/Cancel button to choose how long you want the cycle to be delayed.