Apple TV has been in use for several years now as it continues to gain popularity and speed with a big latitude of Apple TV apps that strive to win the heart of consumers when it comes to home entertainment.

It’s 2022 and there are limited reasons to purchase an Apple TV streaming box. Due to it been Apple has partnered with various large TV manufacturers, such as Samsung, Vizio, Sony, and LG, and incorporated most of the Apple TV’s best features such as AirPlay 2, HomeKit, and even iTunes into their TVs.

The reason is that Apple wants as many of its consumers to have access to Apple TV+.
To be able to watch the Apple TV+ you need to have access to Apple’s TV app, which had recently only been accessible on Apple hardware such as iPad, iPhone, or Apple TV Iou can also access it on Macs). But now it’s available on almost every smart TV and operating system you can think of. This has left Apple’s streaming box in a complicated position. 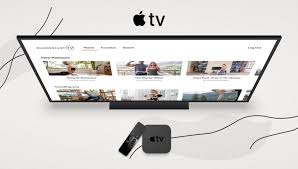 What to achieve with Apple Tv
An Apple TV is a streaming media that plugs into your TV and allows you to stream and download from apps such as Netflix, HBO Max, Hulu, and Disney Plus so that consumer can watch their favorite shows and movies.

It effectively turns any dumb TV into a very smart TV. If you already have a smart TV, it allows you to run Apple’s tvOS as contradicted to your TV’s smart interface.

Apple Tv compared to other Smart TVs
Almost all the new TVs are Smart TVs which means they all come with one of the different operating systems which include Roku, Tizen, and WebOS which allow you to stream shows and movies from the most popular app without the need to separate dongle.

if you are using iPhone or other Apple devices that is an added advantage to your Apple Tv.
As an Apple Tv user, if you have an iPhone it enables you to easily cast movies or shows to your Tv.

It gives you easy access to the Apple gaming and Apple Arcade and Fitness+ and it also allows you to use your HomePods as Tv speakers.

More than any other Smart TV, Apple TV remote controller is designed to be remarkable. In terms of appearance as well as functionality, It isn’t a standard remote.

Every other Apple smart TV comes with a smart remote controller, if misplaced or faulty navigation wouldn’t be simple. As an Apple Tv user, There might be instances where you might not have access to your Smart remote control. For instance, the battery needs to be changed or the remote cannot be found.

When you find yourself in such a circumstance don’t worry as you can still turn on your Apple TV without a remote. Continue reading to understand the simple trick and yet another way to turn on the Apple Tv without a remote control.

How to Turn On Apple TV without Remote Control

This is a one-step method that will automatically turn on your Apple TV. More specifically, this method doesn’t need additional devices.

Add Apple TV Remote App on iOS to the Control Center
If you have an iOS device at hand, then it is practical to turn on your Apple Tv without the remote controller.

The Apple Tv remote app will be available on iOS 12 or later. If you are using the lower versions then you will have to follow the guide below to add it to Control Center.

This method will only work if you have initially paired your Apple Tv with the Apple Tv Remote app.

Which model of the Apple Tv supports the Apple Remote app to turn on it?

The above procedure will work for those users of Apple TV HD, Apple TV 4K, and Apple TV 3rd generation. Such devices can be turned on without a remote by using the remote app.

Where can I buy a new Apple Tv remote?

It is better and advisable to buy your new Apple Tv remote from an authorized dealer. So, buy it from Apple Online Store, a trusted retailer, or any Apple physical Store.

Will Apple Tv Remote app perform all the functionality like a physical remote?

Yes. The user interface of the app looks more or less analogous to your Apple Tv physical remote. This comprises even the virtual control area, menu, etc.

How do you get Apple TV+ free?

Initially, any new iPhone, Pod Touch, iPad, Apple TV, or Mac bought after 10 September 2019 is capable of activating a 1-year free subscription. This has now been shortened to 3-months.

Turn on your Apple device and sign in using your Apple ID.
Open the Apple TV app. Make sure your device is running the latest version of iOS, iPad, tvOS, or macOS. Apple has said the offer should be presented soon after launching the app.